The plan is to save The Railway Arms pub through a community buy-out and re-open it as Saffron Walden’s first Community Pub.

Formerly the Railway Hotel, The Railway Arms in Saffron Walden has stood in the shadow of the old, now closed, Great Eastern branch line since 1865 and is a pub close to the hearts of many in the local area. Situated on the edge of the town centre on the corner of Station Road and Station Street, the pub was renowned for serving some of the best cask conditioned ales and good pub grub to the regulars of the local area.

Featuring in CAMRA’s Good Beer Guide for many years, the pub was the centre of the community from near and far and is still fondly remembered worldwide by old students of the nearby language school who were regulars back in the day. Indeed the former landlord of the pub from 1958 to 1998 – Jim Jordan – was awarded the OBE for his tenure at the pub and is remembered by being named on the nearby ‘Jordan Close’ just along from the building.

After being purchased by Charles Wells around 2014, the new owners closed the doors to the pub on New Year’s Day 2017.

Since then our campaign to save this much-loved community hub has sought to re-open the building as a Community-run pub.

The building was granted Asset of Community Value (ACV) status by Uttlesford District Council in 2018 and through the formation of Saffron Walden Community Pub Ltd (SWCP).

As you know we had planned to launch a second share issue on Friday 28th February. However news from our More Than A Pub (MTAP) adviser caused a rethink. We were advised of a new ‘Community Shares Standard Mark’ scheme and have decided to have our paperwork vetted with a view to achieving the benchmark. We want all our documentation to be produced to the highest possible standard and the new accreditation sets national standards of good practice,

We’re sure that the Standard Mark will give investors added confidence in the share issue and, hopefully, in the governance of the Society, but there are other benefits too. Under the Community Shares Unit’s “Community Shares Booster” programme benchmarked share issues can benefit from pound for pound match funding whereby the unit becomes a shareholding member on equal terms with other community shareholders. The process takes 6-8 weeks to complete and can run in tandem with the Standard Mark process.

Clearly this win-win move means a delay in our fundraising but it’s a delay that the ACV moratorium can accomodate. We’ll now be expecting to launch the standard marked share issue in mid-late April, around 8 weeks before the moratorium expires on 20th June.

In the meantime we’re breathing new life into our Pledge Campaign. In addition to our current share capital of £172,550 we’ve already had £25,675 pledged (as of 3rd April 2020), so we are close to meeting our initial  target of £200,000. This will qualify us for a further £200,000 in Grant’s and loans. With that in place we’ll push on to our ultimate target of £250,000 in share capital that we believe will allow us to purchase and re-open the Railway Arms.

Pledges can be made via this website where the PLEDGE FORM can be completed electronically or downloaded and filled in manually. Paper forms can be dropped off at the Tourist Information Office (thanks to Mark and the team there) or returned to the Company Secretary at the address on the form.

In other news work continues with grant applications and in refining our community benefit offering with MTAP support. and, of course, in liaison with the owners and their solicitors over their expectations in the sale.

Would you like to be involved in our campaign or sign up to our newsletter list? If so, submit your email address or email us through the contact page or complete  the ONLINE PLEDGE FORM or print, complete and return a PDF pledge form/MS Word pledge form.

Also see the latest MODEL RULES, BUSINESS PLAN and COMMUNITY BENEFIT PLAN to find out the latest information about how the pub will be run. 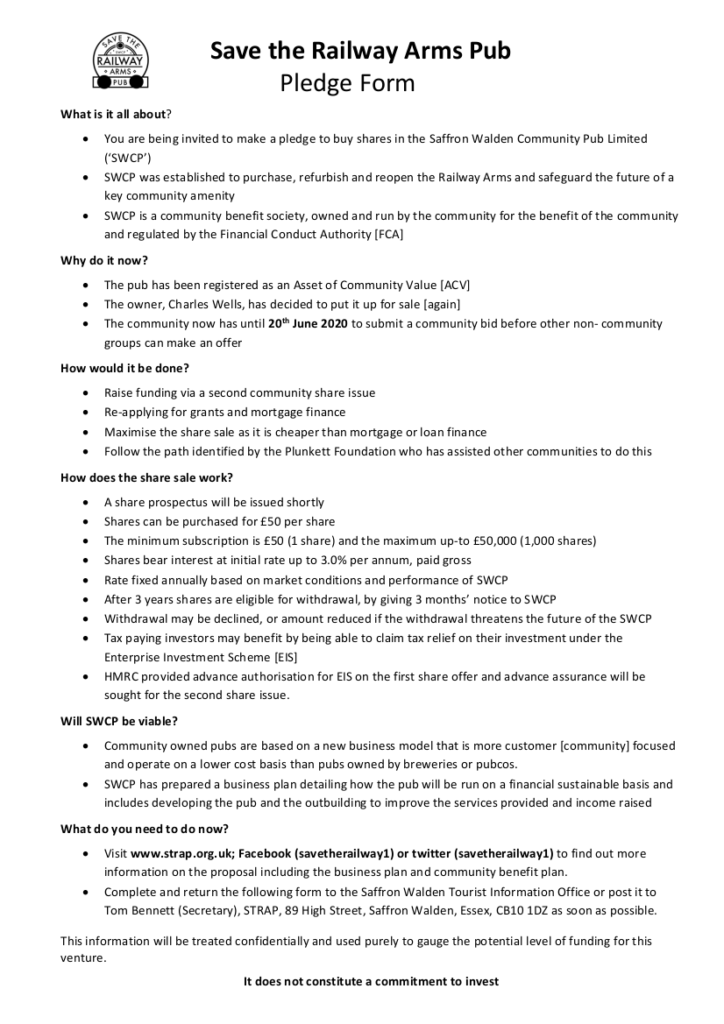 How to Save the Railway Arms Pub

We are proposing that The Railway Arms pub on Station Road in the town should be brought back from the brink and kept as a pub.

The Railway was officially registered as an Asset of Community Value (ACV) at a district council meeting on 30th March 2017. This was a great victory in the face of strong opposition from the owners, and things have moved on massively since: we now have raised substantial funds in share applications, which puts us on a great footing as we attempt to buy the Railway.

Would you like to see Saffron Walden’s first community-owned pub?

Save The Railway Arms Pub (STRAP) is a campaign to save a great old public house in Saffron Walden and to create a community pub that locals can be proud of.

Would you like to see Saffron Walden’s first community-owned pub?

You can download our Business Plan and our Community Benefit Plan below. Please also fill in a Questionnaire to tell us what you’d like to see in the new pub.

Thank you very much for your support.

How much is raised so far?

The total figure of £198,225 represents money raise from those who have purchased shares alongside the pledges for those hoping to buy shares in the second share issue. 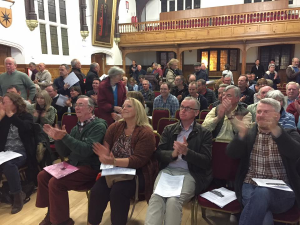 Our application to establish a Community Benefit Society called The Saffron Walden Community Pub Ltd has been accepted by the Financial Conduct Authority. Anyone interested is invited to purchase shares in the society/pub which would given them a vote on all major decisions in relation to the management strategy and how the pub is eventually run.

Whether someone purchases a single share or a hundred, and invests £50 or £5,000, each member of the Community Benefit Society will have one vote only.

In addition, though the value of the shares will not increase, it is proposed that there will be an interest dividend that is paid annually to shareholders, the rate of which will be set annually. Shares may only be sold back to the society.

The Society has received advance assurance from HMRC that the fist share offer will qualify for the Seed Enterprise Investment Scheme [SEIS] and Enterprise Investment Scheme [EIS]. These are government schemes devised to encourage investment in new enterprises and provide tax relief of 50% and 30% of the cost of investment per respective scheme to those buying shares who pay income tax. The Society will seek confirmation that the second share offer will also qualify.

Shares would be eligible for withdrawal from the end of year 3, subject to approval of the management committee and on the basis that any withdrawal will not endanger the financial viability of the Society.

If you are interested in the STRAP campaign, please come along to the next event (details of which will be posted on our website, Twitter feed and Facebook page). We’re really excited about our recent Pup up Pub events as they have allowed us to meet regularly, share news and updates, meet new people and old friends and talk about the things that interest us and others – just like we’d do in the Railway in fact. All the events so far have been brilliant, and we expect future events to be better still!

If you can’t make it to the next event, submit your email address above and we’ll send you further information and news as it arises.

If you’d like to ask any questions about the campaign, or indeed if you’d like to put forward any ideas or make any suggestions, please fill in the form on our contact page.

“One of the best things you can do to help save the pub, is follow the link below and join the Community Benefit Society and buy some shares. Thank you.”