Thursday 17th May saw our Special Members Meeting take place at the Town Hall. SWCP Ltd members were joined by members and supporters of STRAP who had been invited by the Management Committee.   The Treasurer, Tom Bennett confirmed the status of SWCP Ltd members as those who had applied for and fully paid for the minimum number of £50 shares and were recorded on the Society’s share register.

The Treasurer advised, in answer to a question, that it is his understanding that those wishing to claim tax relief under both the Seed Enterprise Investment Scheme [SEIS] and the Enterprise Investment Schemes [EIS] will still be able to do so should SWCP be successful in purchasing the Railway Arms in the future. Tax relief under both schemes is triggered when 75% of the share capital raised has been spent on the qualifying investment, i.e. the purchase of the pub. The Treasurer advised he will confirm his understanding with HMRC and advise all shareholders. In the meantime anyone wishing to discuss their investment in the Society is invited to contact the Management Committee via the usual channels.

A brief reprise of progress since the Railway was closed reported up to and including recent discussions with Charles Wells. Attention then turned to the results of our recent Members Opinion Survey, and what it revealed about attitudes to their nascent plans for a major refurbishment and to re-open the pub themselves as a tied tenancy.

Responses from 252 people suggest that 87.7% are disappointed or very disappointed that the Railway Arms would not be a Community Owned Pub under these plans and would visit it only occasionally at best. Whilst 50.6% would visit occasionally, 37.1% said they would not support the pub as planned. 1.6% were very pleased by the plans and likely regulars accounted for 9.2% of responses. We are led to believe that three potential operators have expressed an interest in taking the tenancy, but have not yet submitted business plans. These figures and the additional comments offered by 184 people, 73% of respondents, will no doubt be of interest. This huge response demonstrates how passionately people feel about the campaign. Some emerging themes are discussed below.

Many people were generous in their congratulations on the campaigns efforts and it is clear that people feel that the potential re-opening of the pub can be seen as an achievement of the campaign.

Significant numbers of people have recorded their dislike and distrust of Charles Wells for the way they have handled matters at the Railway Arms. Many are suspicious of their long-term plans, fearing that the spectre of development will re-appear before long. Consistent doubts over the viability of the pub and the business model presented in adverts for the tenancy were expressed. Most significant perhaps, and certainly very heartening, was the clear support and enthusiasm for the social benefits that a community owned Railway Arms would provide and a desire for STRAP and SWCP to persevere. Many feel that Charles Wells may find getting planning permission, attracting a suitable tenant and rebuilding a profitable customer base difficult.

Survey results and a table recording the emerging themes derived from the comments can be found HERE.

The meeting felt that we should keep a ‘watching brief’ on the Railway over the coming months and that, in tandem, we should investigate making an active start on delivering the social benefits of a community pub for Saffron Walden. Unless Charles Wells’ plans falter soon this will clearly have to begin elsewhere and it was suggested that we expand our relationship with Fairycroft House to build upon our Pop up Pub successes and run a regular programme of full-weekend PuP’s whilst in waiting. Longer term it was suggested that, should Charles Wells succeed in re-opening the Railway, the Society should investigate the prospect of delivering community benefits via a Community Micropub in the town.

The Management Committee clearly has work to do in developing a plan to fulfil these aspirations, whilst maintaining our primary purpose and ensuring that we are in a position to purchase the Railway Arms should it come back on the market.  We will look into the viability of these options and obligations over the next few weeks and report back as soon as possible. 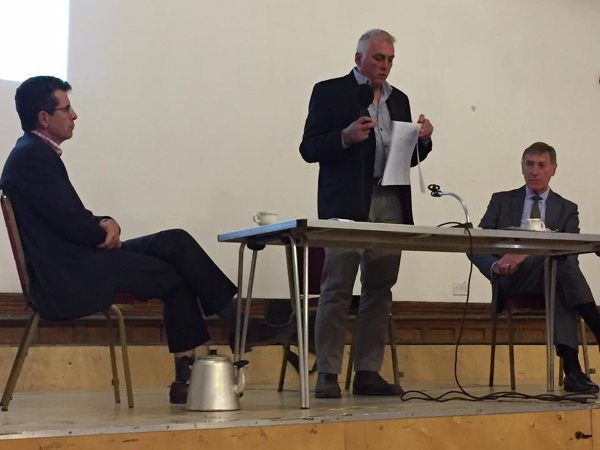 ‘From the towns all Inns have been driven: from the villages most…. Change your hearts or you will lose your Inns and you will deserve to have lost them. But when you have lost your Inns drown your empty selves, for you will have lost the last of England.’

HILAIRE BELLOC, This and That and The Other, 1912