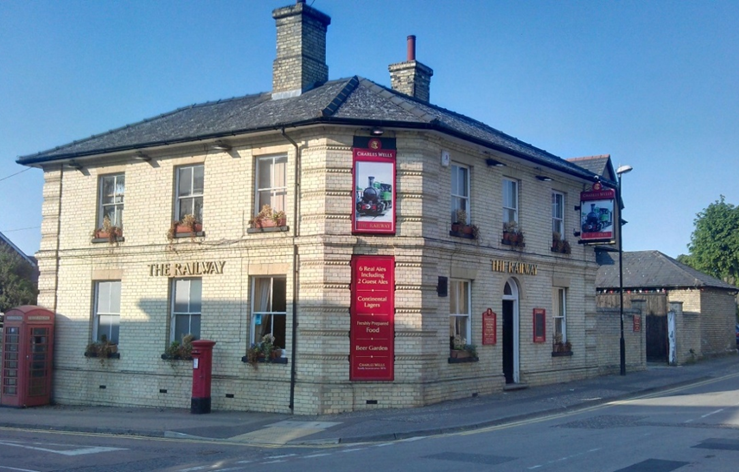 Dear All
I’m sorry that I’ve been a bit remiss in not getting this update out sooner. I’m sure you’ll understand it is holiday time of year and work also continues. At least my delay has been more than matched by the progress of the planning application at the Railway Arms. I understand that the planners were working towards the committee meeting on 24th July but the agenda has been published and the case isn’t on it. I’m planning to ask for an update myself and will let you all know as soon as I have something.

In the meantime please see below for an assessment of the revised scheme that has resulted from correspondence between the planners and the architects. Comments were submitted within a 2 week consultation period and those made during the initial consultation, that haven’t been overtaken by events, still stand.

Firstly in response to concerns about the proposed fire escape the scheme now proposes to retain it in its current location along the east elevation of the building, with the lower part turned through 90° to allow access to the proposed new beer garden. The alteration, along with the removal of the seats (and presumably the fence) in front of the east range (stable and cartshed block) retains the views across the yard to the outbuildings. This is a welcome improvement, though the fire escape alteration may be a buildings regulations matter anyway.

Secondly, deliveries are addressed via a cited report from the logistics department at the brewery which maintains that the 26 tonne dray would not enter the site and would unload on Station St alongside the double entrance. The delivery would be moved by hand to the pub and to the beer drop. The report apparently states that this has always been the case and would seem to address stated concerns about deliveries, assuming it has always been so, and assuming that the council is prepared to see the practice continue.
Parking was clearly a concern and in this respect the new information is less helpful and should be challenged. The architects cite the distance between the pub, the fire escape and the outbuildings claiming that it does not meet current standards for a parking bay and turning circle. Therefore, they suggest, the site cannot accommodate compliant parking. This may be true if the scheme goes ahead, but it conveniently ignores the fact that the pub has existing customer and staff parking and that it is not subject to new compliance standards if no development takes place in the courtyard. The pub could function unaltered with a perfectly good car park if there were not a pressure to locate a ‘spectacular courtyard garden’ on it.

This pressure derives, of course, from the proposed scheme’s silence on the future of the existing ACV registered beer garden and private garden, which also form the setting of the locally listed pub. Of course the local listing includes the stable and cartshed block and, whilst they are no longer to be fenced off, the owners remain silent on their plans for them too.
The planners cannot take this silence into consideration when deciding the current application and a clever game is being played. However, the revised plans still show a hard and fast boundary between the car park and the existing beer garden and this can and should be challenged. If it isn’t there is a danger that new boundaries would be established within the Railway Arms holding without due consideration. With such a new boundary established we can all imagine how much easier it would be to argue for a development in what is now a much loved green and open family garden.

Other points at issue concern the requirement for a Heritage Statement to accompany this application. A Heritage Statement is a document which describes the significance of, in this case, a historic building and requires an applicant to justify their proposal and any impact it would have on historically significant aspects of the building. In this case the impact would still be the loss of historic sash windows, specifically cited in the local list entry, and the imposition of a timber pergola obscuring the eastern wall of the pub. They would need to make a case that the benefits of the scheme (re-opening, financial viability etc) outweigh the harm to or loss of historic fabric and significance. The architects appear to draw the line above local listing though the relevant planning guidance does not. Whereas the architects say that they would not expect a Heritage Statement to be required, arguing that local listing is not that important and that their scheme is not ‘significantly detrimental’, the relevant planning guidance is more nuanced. The National Planning Policy Framework says that the level of detail in a statement should be proportionate to the importance of the asset, not that no statement is required at local level. The balanced judgement that the Conservation Officer and Planner need to come to in weighing up the proposal seems to require one.

The planners will need to decide whether newly established boundaries, the loss of parking and its impact on surrounding streets and the loss of historic fabric are outweighed by the merits of the proposed scheme. I would question whether it is the building or the business plan that should adapt and I’d point to a sustainable alternative – an existing, fully funded community offer to purchase, that can retain existing parking, work positively within the constraints of heritage interest and community value and still be economically viable.